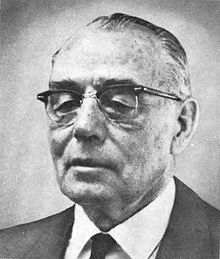 Our nation is currently in great debt, and few seem willing to consistently back measures that cut back government and reduce debt. There was one man, however, who was a consistent pest for politicians of both parties who wanted to pass spending bills: Iowa’s Harold Royce Gross.

H.R. Gross (1899-1987) was by profession a journalist and began his time in the public eye as a quick-tongued popular radio news announcer, where he worked alongside and befriended Ronald Reagan, who at the time was a New Deal Democrat and covered baseball. In 1940, he decided to challenge Republican incumbent Governor George Wilson for the nomination, criticizing his administration as well as the state GOP for what he regarded as insufficient assistance to farmers. He lost by only six points despite being critiqued for public advocacy for encouraging farmers to fight bovine tuberculosis testing in 1931 and for endorsing a 1933 episode of mob violence against a judge for issuing farm foreclosure notices (Schwieder & Schwieder, 2006). This would be the only time Gross lost an election in his career. His future would not be in Iowa state politics, but in federal politics.

In 1948, Gross was elected to the House from Iowa’s 3rd district after defeating regular Republican incumbent John W. Gwynne in the primary, aided by union anger at Gwynne’s record on labor issues. During his first few terms, he was something of a populist and he was initially met with suspicion by Republican regulars; some state party officials had accused him of being a “radical leftist” during the primary. They had no idea how wrong they would turn out to be.

Gross seemed to find himself often at odds with whatever president he served under, Democrat or Republican. While many Republicans fell in line with the moderate agenda of President Dwight Eisenhower, particularly on foreign policy and farm legislation, Gross was unimpressed by General Eisenhower’s authority. He never voted for foreign aid, objecting to its high cost and viewing it as a give-away. Throughout the 1950s, Gross evolved from a populist into one of the chamber’s most solid conservatives. He was relentlessly critical of taxpayer funded junkets and pork barrel spending. Gross was not only a watchdog of the public treasury, but also of public morality, staunchly opposing any sort of impropriety in governance.

In the early 1960s, Gross was one of the Kennedy Administration’s most prominent critics. He derided the Peace Corps as a “haven for draft dodgers”, denounced the D.C. aquarium proposed by the Kennedy Administration as a “glorified fish pond”, and opposed NASA funding (Kauffman, 125). After the Kennedy assassination, Gross engaged in quite possibly the most heroic act of miserliness in American history. He had already critiqued 24-hour secret service protection of Kennedy’s widow and children, but when Gross argued against the cost of an eternal flame at Kennedy’s grave, he became a Congressional legend if not so already. He made few exceptions to his naysaying, and civil rights was often not among them. Gross voted against the Civil Rights Act of 1957, the Civil Rights Act of 1964, the Voting Rights Act of 1965, and fair housing legislation. However, he voted for the Civil Rights Act of 1960, banning poll taxes for federal elections and primaries, and the Jury Selection and Service Act (prohibiting racial discrimination on federal juries). He was one of the most uncompromising critics of Great Society legislation and voted for no major Johnson Administration measures.

Despite his controversial stances, he was the only Iowa Republican reelected to Congress in the Johnson landslide of 1964. One factor that helped him survive this wave was one that aided the radical Vito Marcantonio in his ability to be reelected: excellent constituent service. According to an area newspaper editor, he “has done so many little favors for so many little people that he would be extremely difficult to defeat in either a primary or a general election” (Schwieder & Schwieder, 352). Unlike many other Republicans, Gross’s conservatism waxed rather than waned during the Nixon era. His commitment to limited spending extended to the Vietnam War; he opposed the expansion of the war to Cambodia on cost grounds. Gross of course also accepted no extensions of the Great Society that Nixon was willing to implement. In the entirety of his career, he had but one regret: not voting against the Gulf of Tonkin Resolution in 1964, which authorized the use of conventional military force in Vietnam.

Gross did not run for reelection in 1974, the last of the Republican non-interventionists to leave office. Among his achievements was saving an estimated hundreds of millions of dollars for taxpayers, quite possibly even billions (Schwieder & Schwieder). In 1976, he backed his old friend Ronald Reagan for president over Gerald Ford and lived to see him be elected twice. If this post gives you the impression that I admire Gross for his commitment to limited spending and honest dealing in government, you’re correct!